Stephen King And A Lesson In Authenticity

I’m a mother of two boys who loves Star Wars and Marvel—stories where good prevails over evil, and a knight in not-so-shiny armor thinks he rescued the girl, but really, they saved each other.

Over summer break, my boys (man-children) were home from college and obsessed with a video game called Overwatch—a team-based, multiplayer, first-person shooter game (dang, that’s a mouthful). One of the characters in this game is Reaper, an elite soldier and terrorist who wears a skull mask, disguised as Death.

On a sunny afternoon, a spark of creativity hit me out of nowhere, and I wrote a scene with Reaper in a dungeon, betrayed by those he had fought alongside. From this one scene, Chasing the Darkness was born. However, I had a lot to learn about writing a novel. I’d written one other, but it’s a complete mess and filed away. One day, I will rewrite that story, but for now, I’m obsessed with my world of magic, love, and sword fights.

One of the first books I read about writing was Stephen King’s, On Writing, A Memoir of the Craft, and can I tell you I developed a bit of a crush on Mr. King after finishing the book. I wanted to fly to Maine, buy him a cup of coffee, and pick his brain.

If you haven’t read his memoir, I’d highly recommend it, especially if you are interested in becoming an author. One key point that stuck with me was to be authentic in my writing; to tell the truth, especially in dialogue. You want your characters to have resonance and realism.

I’m all for being real. Friends and associates have said that the first word they would use to describe me is real. Not nice or sweet. But real. I’m choosing to take that as a compliment. 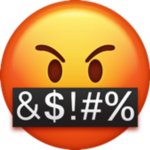 An example King uses is when someone hits their thumb with a hammer, they most likely let loose a few choice expletives they wouldn’t say in front of their mother or preacher.

As I wrote my novel, Chasing the Darkness, I debated whether I should write it for the inspirational or general market. The book does have a few swear words. I’ve gone back and forth, as I’m a Christian (and yes, I know Christians cuss —I’ve struggled with it for years), but in the inspirational market, your novel cannot have any profanity. My protagonist is an assassin who slices people’s heads off and, therefore, wouldn’t have any qualms about swearing. The novel also has some romance, which means a little hanky-panky (wink, wink). If I take this “color” out, will I lose my story’s essence, or not meet the reader’s expectations? Will I be telling the truth?

This question has plagued me for a while. Currently, my novel is marketed toward the general audience, and we’ll see what happens. But in the meantime, how would you define authenticity?

Share
← PREVIOUS
My, What Lovely Adjectives You Have NEXT →
Inspiration Strikes

To be able to share your thoughts from your heart. To not worry what others think, but never, ever directly hurt someone by doing it. It is very hard to do this and takes extremely thoughtful wording as surely someone will take offense. I wish I could offer tactile steps to get the message across and still be know as a woman of honor. This would be a really great discussion. Cassie, I am so happy for you! I will certainly read your book!

Hi Julie and thanks so much for your support. Sharing your thoughts and not offending someone is definitely hard to do. I usually find myself chewing on my shoes after putting my foot in my mouth. However, when I think of you, I would consider you a woman of honor.