SPOILER ALERT! If you haven’t read Chasing the Darkness, then get off this page as fast as you can. You have been warned. 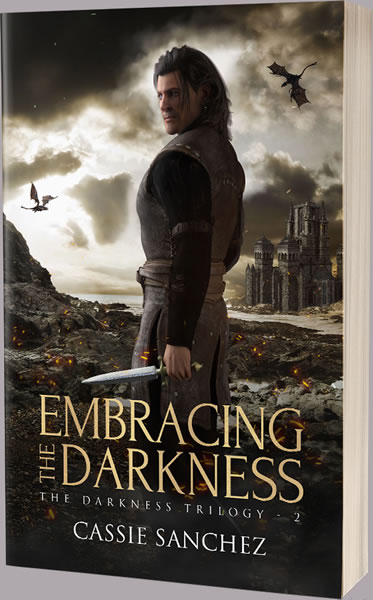 What lurks in darkness cannot hide from the light.

Jasce Farone, previously known as the Angel of Death, has returned to Orilyon as commander of the Paladin Guard in hopes of locating his long-lost sister and settling down with his fiancée, Kenz. But now that peace has come to Pandaren, Queen Valeri is hosting the Gathering—a meeting of five kingdoms, and among those invited are the Vastanes, whose war crimes have not been forgotten. And though the rulers of each kingdom claim they want peace, ulterior motives hide in the shadows.

As the Gathering begins, lethal magic-hunting creatures terrorize the people, and Spectrals are reported missing. Jasce is forced to choose between the search for his sister and the survival of the kingdom he has sacrificed everything to save.

In this second installment of The Darkness Trilogy by award-winning author Cassie Sanchez, Jasce, Kenz, Kord, and Amycus return and are joined by a new cast of characters to battle political intrigue, foreign magic, and mystifying beasts. Jasce will need all his magic—and more—to defend those he loves, while resisting the familiar embrace of the Angel of Death, who demands blood at any cost.

“With strong main characters, tastefully done romantic scenes, and an engaging plot, Sanchez's fantasy delivers it all from cover to cover.”

“Sanchez’s follow-up to Chasing the Darkness squeezes a huge cast into its lively narrative. The characters are so multifaceted and unpredictable that villains are charming; allies are occasionally aloof…The exhilarating final act opens the door to an unexpected denouement that only intensifies the saga. An animated cast energizes this grand tale of faraway kingdoms and magic.”

“Cassie Sanchez displays her creative prowess as she weaves a complicated, compelling story…Readers will find the fantasy and romance components in Embracing the Darkness a powerful saga of change, redemption, and transformation.”